La Caputxeta Galàctica is a multimedia stage show based on the well-known tale of Little Red Riding Hood, offering a unique view of the popular story. This multidisciplinary piece explores various modes of artistic expression, the combination of which results in a new and original expressive form that immerses the audience.

The show brings together three video artists, two painters, a musician and an actress, who together create a film ‘live’ in such a way that the audience can enjoy both the finished work – projected on a large screen – and simultaneously see its ‘making of’.

The show can be performed both outdoors or indoors, in alternative spaces as well as conventional theatres. 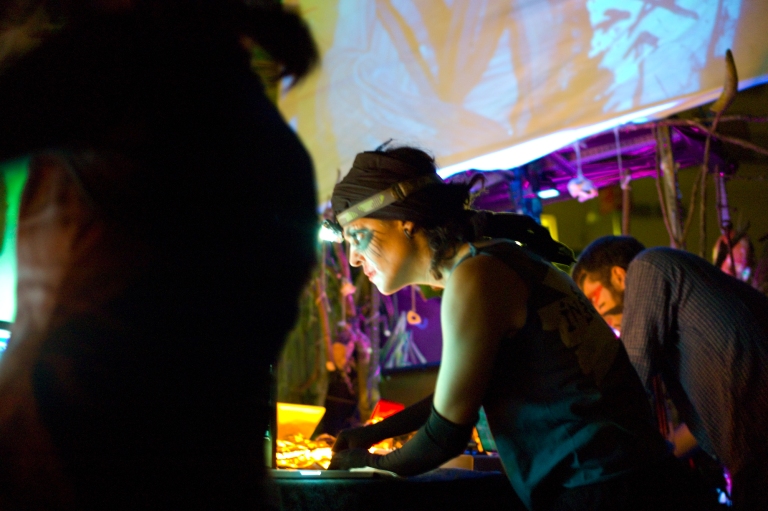 “A great outdoor visual spectacle from Insectotròpics company, who made their name and tour internationally with their galactic version of Little Red Riding Hood.”

“…artistic rebellion actually broke out at night, when the Catalan group Insectotròpics offered up their explosive multimedia show. I had never seen anything like it. A true revolution of form through its imaginative mix of genres…”

“The company Insectotròpics is perhaps one of the most refreshing of the Catalan street art scene, Their visual discourse is lush and bold”

“… If there had been a proposal that conceptualises all that is represented in dialogues between the visual, performative, sound, the artistic and the digital, and yet more, until it was the theatrical multimedia work under the direction of Insectrotòpics. 10/10.”